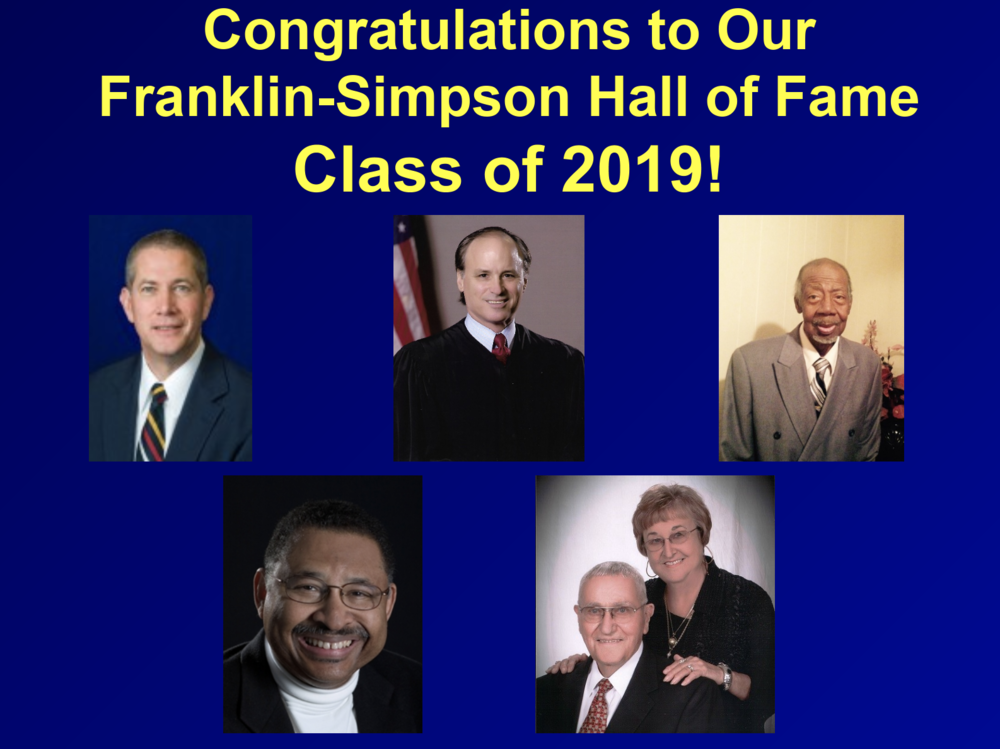 Simpson County Schools and Franklin-Simpson High School will be celebrating the induction of the seventh class in the Franklin-Simpson Hall of Fame on Thursday, April 25, 2019.  The event is being held at FSHS starting at 5 PM.  We will begin the induction ceremony at 5:30 PM in the Commons Area adjacent to our new gymnasium.  A reception will follow the ceremony.  We invite you to join us as we celebrate our school community’s rich heritage and these distinguished recipients of the Hall of Fame recognition.

The Franklin-Simpson Hall of Fame 2019 Inductees:

FSHS and the Simpson County Schools have a rich history and many alumni who have distinguished themselves, as well as many others who have made significant contributions to our school system.  Last April, we celebrated the induction of the sixth class of the Franklin-Simpson Hall of Fame with a ceremony which recognized Businessman, Farmer and former School Board Member Don Halcomb; Businessman and Community Volunteer Lemuel Johnson; Educator Mary Lou Mathews; Businessman and former Magistrate Charles McCutchen, Sr.; and NASA Rocket Scientist Dave Wagner.

“This is a time to celebrate our graduates who have distinguished themselves and others who made a difference for our school system,” said Superintendent Jim Flynn.  “We look forward to celebrating this class of inductees with a wonderful ceremony and reception in their honor.”

Annually, the school district will add another class to the Hall of Fame, which will be located in the Commons Area of FSHS, which is a beautiful area to highlight the Hall of Fame Inductees.

·       Nomination shall include the completed nomination form and may include up to 5 letters of recommendation (no more than 2 pages), and any other documentation deemed appropriate (not to exceed 5 pages).

·       The superintendent of schools on a yearly basis will appoint the selection committee.

·       The selection committee will determine the number of inductees each year.